Have you watched a pianist or guitarist, who is also a singer, play and sing with complete freedom and independence?  It’s difficult, but important, to develop this skill.  When you can attain independence, it enables you to think more creatively and also phrase more musically.  This is all about training the subconscious.  It can be done by consistently practicing the exercises below.

Here are the six steps:

2) Develop a bass line.  You should think like a bass player.   Bassists hold down the groove.  They also lead the mind through the tune.  Bassists are always thinking forward to the next chord.  This can be done by using simple “lead-ins” or a complete quarter-note walking bass line.

Remember . . . this is a very simple, basic idea of the bossa.  It is strongly suggested that you listen intently to a real bossa.  Listen for the subtle “flavors” of the groove.  It is like an actor deciphering a dialect that they want to learn.  Feel free to change the above groove to match what you are hearing.

4) Play and Sing the groove using all the inversions of the chord.  Bounce around between the inversions.  Listen to the top note of the chord as a melody.  Do this over and over (in all keys) until it is totally subconscious.

5) Play the groove while speaking in complete sentences.  Yes . . . I said, “speaking in complete sentences”.  It is impossible to lock in (or “meter-beat) to the groove when you are speaking.  We generally do not want to “lock in” melodies because it is un-natural and unmusical.  Also, your mind must be fully engaged to speak intelligently.  Try it.  It’s very difficult.  This takes practice.

6) Sing complete short phrases while playing the groove.  Always think forward to a definite destination note.  Try “talking” the music phrases.  Think of carrying on a conversation.  Eventually, you can sing or scat through an entire tune in this manner.

This can be applied to learning any tune.  Develop the groove.  Learn the chord changes.  Play melodies freely and easily over the groove.

I have many jazz tunes id like to learn and play by ear on piano by transcribing. I have musical challenges transcribing complex harmonies, melodies and bass lines essentially songs in general. My question is,  how specifically should I listen to new material in order to transcribe it? 2, what should I be listening for? 3 how can I enhance the clarity of what am hearing (bass lines, complex harmonies & melodies) in order to hear exactly what to copy and play (transcribe) I can not hear and copy/transcribe in order to learn am frustrated how do I solve these musical challenges?

Music theory must be “real”.  You can’t just learn it intellectually.  It is strongly suggested that you sing intervals.  Learn specific chord progressions in all keys and all inversions.  Learn to feel and identify all modes of every scale.  This will prepare you to transcribe difficult music.

Start transcription by identifying the bass line.  Then, transcribe the melody.  Those are usually easier to hear.  Finally, listen for the specific mode of each harmony.  I think it is better, and easier, to identify the mode than the chord.  Once you know the mode . . . then, label the chord.

This all comes down to your ability to hear pitches and recognize harmony.

Think of the drummer, guitarist or pianist who sings when he plays.  He has to have the playing totally subconscious so that he can freely sing.  It’s my belief that singers should sing “against” the groove, not with it.  Singers breathe and phrase.  They tell stories and create moods.  This can only be done when the musician is freely independent.

The question is:  “How do you develop independence?”  The answer:  “One-step-at-a-time.”

There is a gland in the center of our brain called the Corpus Callosum.  It controls the right and left sides of our body and brain.  It also causes us to “freeze up” when we are trying to be independent on the piano.  In a sense, you have to train this gland.  It’s not easy.

Here are the steps that I recommend to train the Corpus Callosum:

Make a daily practice of developing independence.  This is a key to becoming a successful improvisor.  It also develops a great style.

The “So What” Chord 3-4-4-4 (from top down) is the chameleon of voicings.  It can be a major, minor or sis chord depending on the root.  I think it is too limiting to think of only using the fifth in the melody.  My main way of using it is to think of the voicing from the top-down. 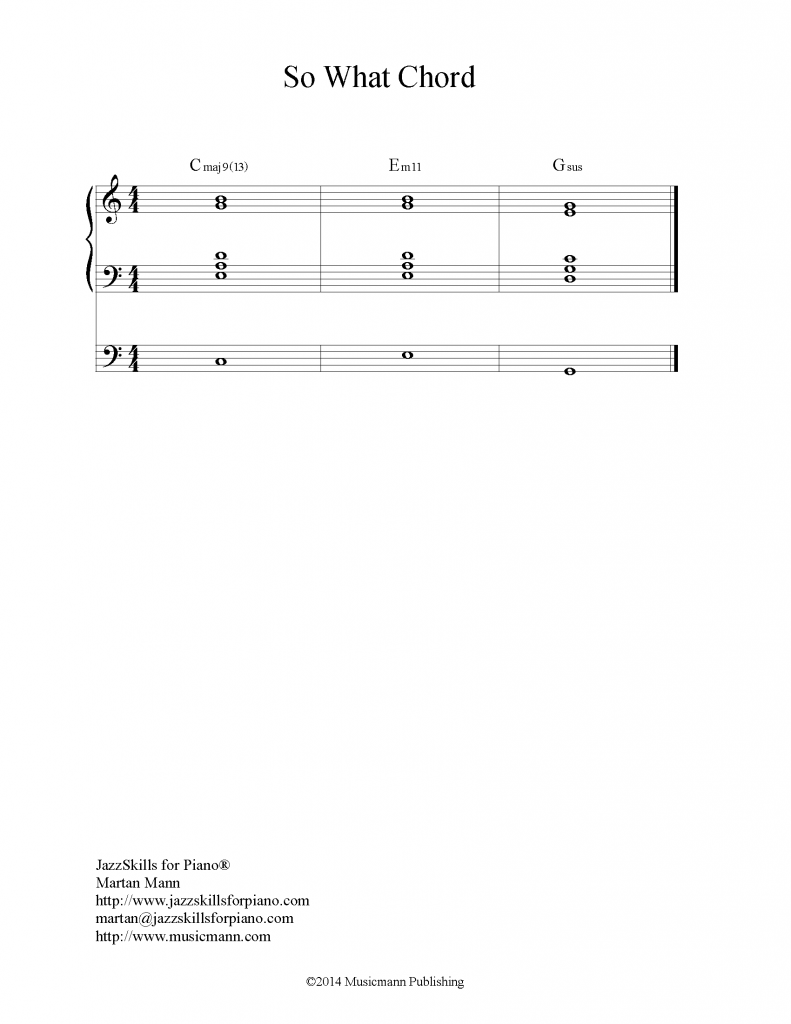 Once you understand that, begin practicing the Tritone Sub Exercise (using the Turnaround).  To do this, we change all the chords to dominants.  For instance:  C7, A7, D7, G7 (I VI II V).  Do this in all keys.

Now . . . you can change any of the dominant sevenths to it’s Tritone Sub by moving the root a tritone away.  For instance:  instead of moving from C to A7 . . . . change the A7 to an Eb7 (by moving the root).  Therefore you now have two alternatives . . . the regular II and the tritone bIII.  You can also change the II chord and the V chord in the same manner. END_OF_DOCUMENT_TOKEN_TO_BE_REPLACED

Music is not about perfection.  It is about feeling.  Jazz, in particular is about groove.  It is groove which gives jazz it’s identity, it’s purpose, it’s joy.  You know groove when you hear it.  You know what it feels like.  The main issue is . . . how to develop a great groove in your playing?

But this does not create a groove.  The groove is a point of “off-ness”.  Being “off” of the click of the metronome creates emotion.  If the player simply attempts to duplicate the metronome click, the music is “groove-less”.  It won’t swing.  It won’t have the required emotion.

I think of “time” as a pressure, not a click.  It feels like water coming out of a hose.  It is continuous.  It never “let’s up”.  Once you have identified this pressure (I often feel it in the small of my back), then identify with it.  The pressure is not dependent upon what you are playing.  It is just “there”.  It is automatic.  It is constant.

How do you develop a particular groove?  (In fact, there are many different grooves in jazz.)

First, you have to specifically identify the groove you want to develop.  Is it a deep blues groove?  Or, maybe an intense “Chick Corea Groove”?  Perhaps it is a “Stan Getz Bossa Groove”?  You might be trying to duplicate an “Oscar Peterson Groove”?
Second, listen to a recording which exemplifies the particular groove you are trying to develop.  This is important:  sing the groove.  To sing the groove, don’t think about the chords or melodies.  Make up a scat language which sounds like the groove.  You don’t have to sing on pitch.  Just approximate the feeling and timing of the groove.

Once this is automatic, then start singing improvised simple melodies over your accompaniment pattern.  The sung melodies do not duplicate the groove.  You have to imagine that you are a singer or instrumentalist singing off of the accompaniment pattern.
Finally, apply this groove to an actual song.  Start by just learning the accompaniment and chord changes of the song.  Then, very slowly add in melody.  Adding in melody is a significant level of difficulty.  Remember not to play the melody as a groove.  The melody is separate from the groove.

Always return to the recording of the original groove that you are attempting to learn.  Keep reinforcing it in your subconscious.  Do it every day until the groove is permanently part of your subconscious language!

We have often been told that “music is the universal language”.  Another way to look at this is to consider music as a direct language of emotion.  It is an instant access into the subconscious of the listener.  It is powerful!

I’m not an expert on brain functions, but I’m fairly sure that the same center of the brain that allows to speak, converse, create and conceive is the same “language center” which allows us to improvise and compose music.  If that is true, we can directly improve our ability to improvise by learning music the same as we learn other languages.

I have some exercises which will develop your music-language skills. END_OF_DOCUMENT_TOKEN_TO_BE_REPLACED

There a many books which teach the theory of jazz.  Learning the theory of jazz is important.  However – what many pianists truly need is a method to expand their various jazz skills using that theory.  To put this simply, competent jazz pianists play automatically.  They “flip the switch” and the music flows out of them.  The main issue is . . . how did they get to that skill level?  Also, is there a more direct way to arrive at that point?

We know that classical players spend years honing their skills.  They work on piano technique, pianistic skills, interpretive knowledge.  This is done by studying with competent teachers who teach them the skills of playing the piano and guide them through piece after piece. Through years of learning and memorizing classical pieces, the classical pianist eventually develops musical skills, good tone, a fluid piano technique, good timing and rhythm, phrasing, interpretation, and music-reading skills.

END_OF_DOCUMENT_TOKEN_TO_BE_REPLACED

Do You Have A Music Question To Ask?

Please head over to my question form.